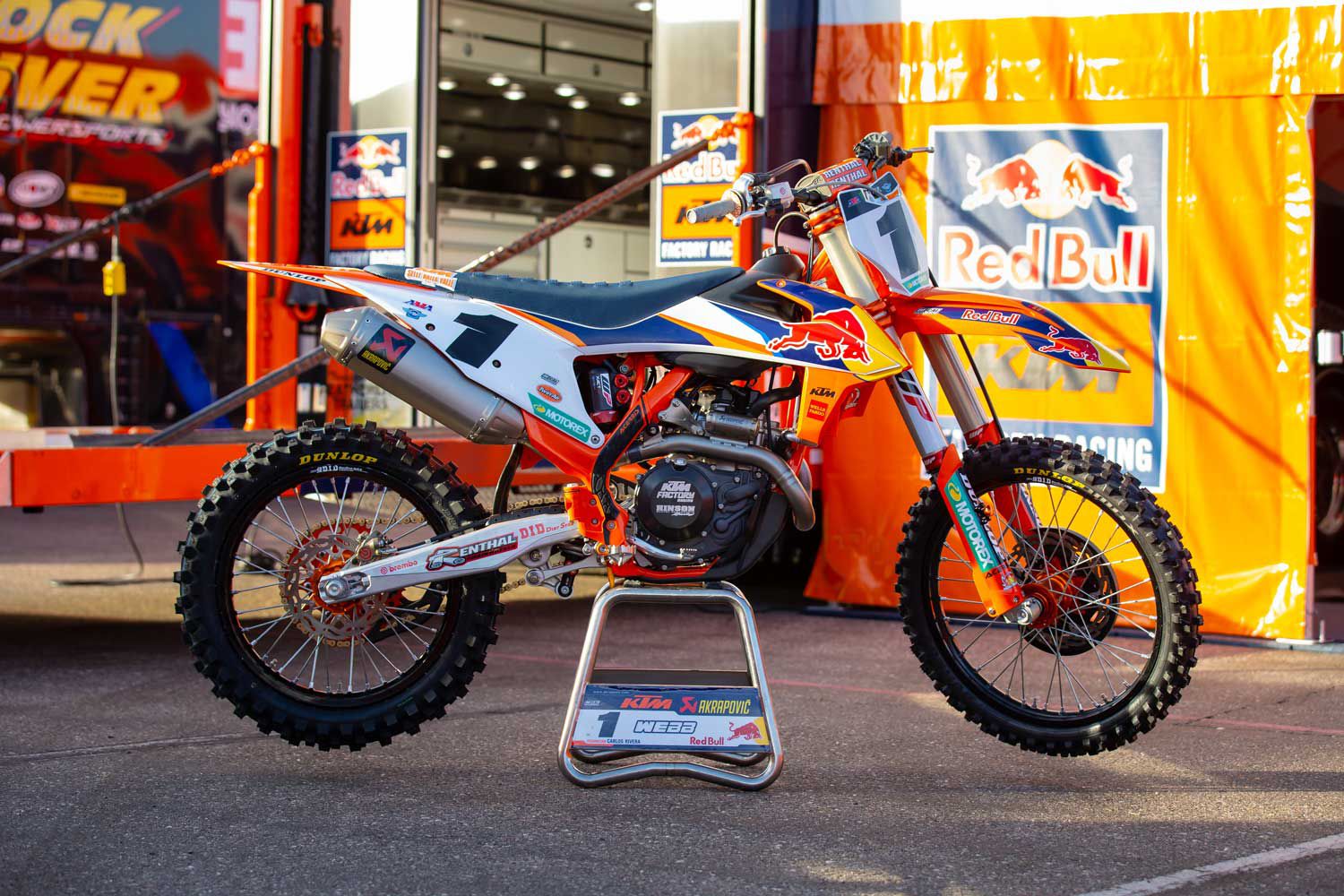 Cooper Webb signed with the Red Bull KTM Factory Racing team for the 2019 season and won his first 450SX title that same year. (Spencer Owens/)
After finishing 13th overall in the Monster Energy AMA Supercross series point standings in his rookie season in the 450SX class in 2017 and ninth overall the following year, Cooper Webb moved to the Red Bull KTM Factory Racing team prior to the 2019 season. During the 17-round series, the North Carolina native landed on the podium 13 times, with seven of those being wins, on his way to clinching the 2019 450SX title. 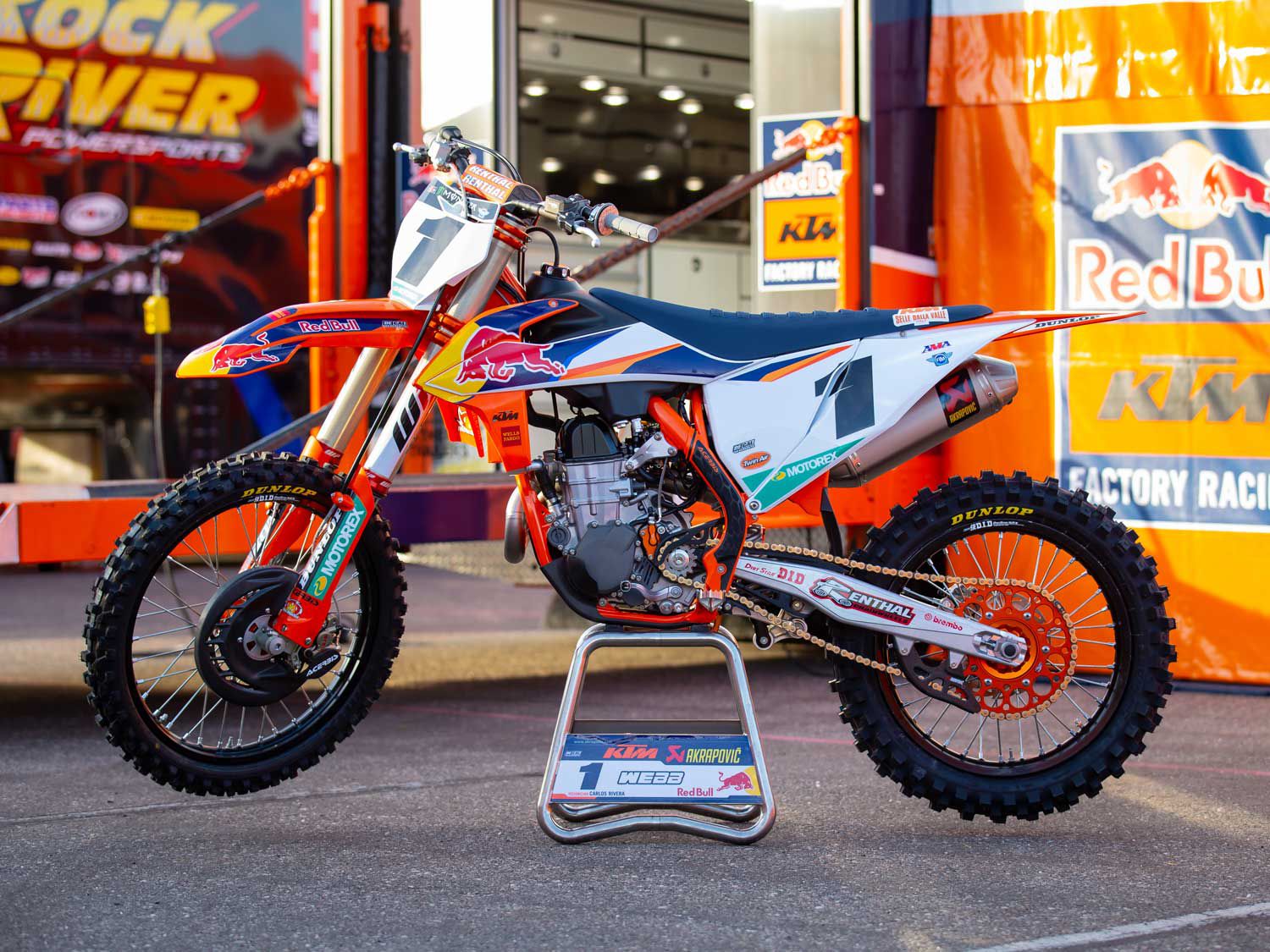 Webb’s mechanic Carlos Rivera, who spent many seasons spinning wrenches for Ryan Dungey when he was winning premier class titles, took us through the reigning champ’s 450 SX-F. (Spencer Owens/)
Whether it was the new bike, different team, working with Roger DeCoster, having Aldon Baker as a trainer, moving to Florida, or a combination of all the above, Webb’s transformation as a 450 class racer from 2018 to 2019 was nothing short of remarkable. To learn more about the reigning champ’s factory KTM 450 SX-F, we chatted with his mechanic Carlos Rivera—a longtime member of the Red Bull KTM Factory Racing team who spun the wrenches for Ryan Dungey when he won his premier class titles with KTM. 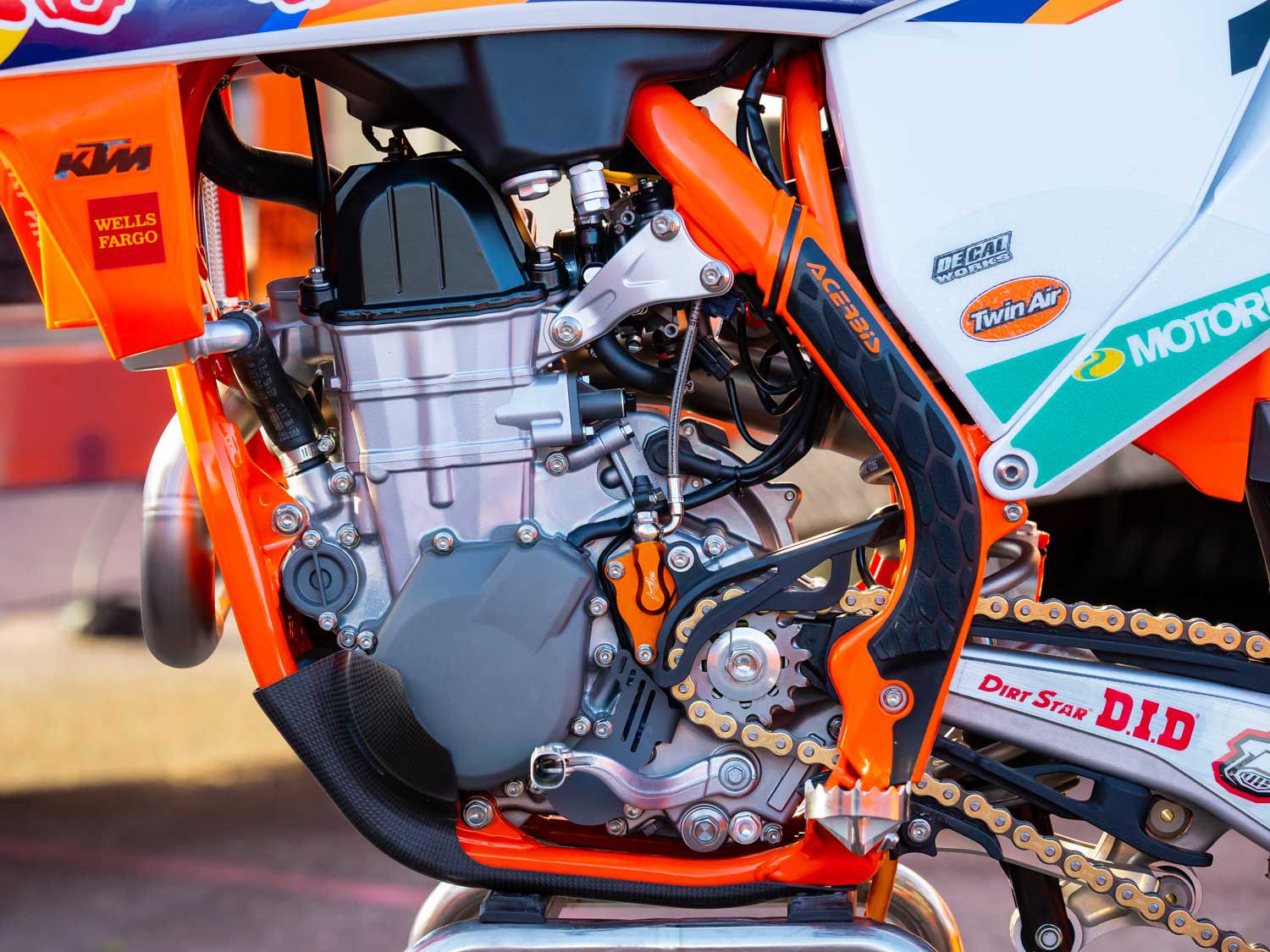 A Kite clutch slave cylinder and akadized covers grace the exterior of the 450 SX-F engine. Internally, there are plenty of works parts from Austria including the camshaft, piston, and connecting rod. (Spencer Owens/)
Aside from the Kite clutch slave cylinder and akadized parts such as the ignition cover, right side case, water pump cover, and oil filter cover, Webb’s engine has a fairly stock appearance on the outside, but there are some special ingredients that lie within.

“Pretty much everything we have in here is factory parts [that come] from Austria,” Rivera said of the 450 SX-F powerplant. “The KTM works parts we have in the engine [include a] different cam, piston, and [connecting] rod.” 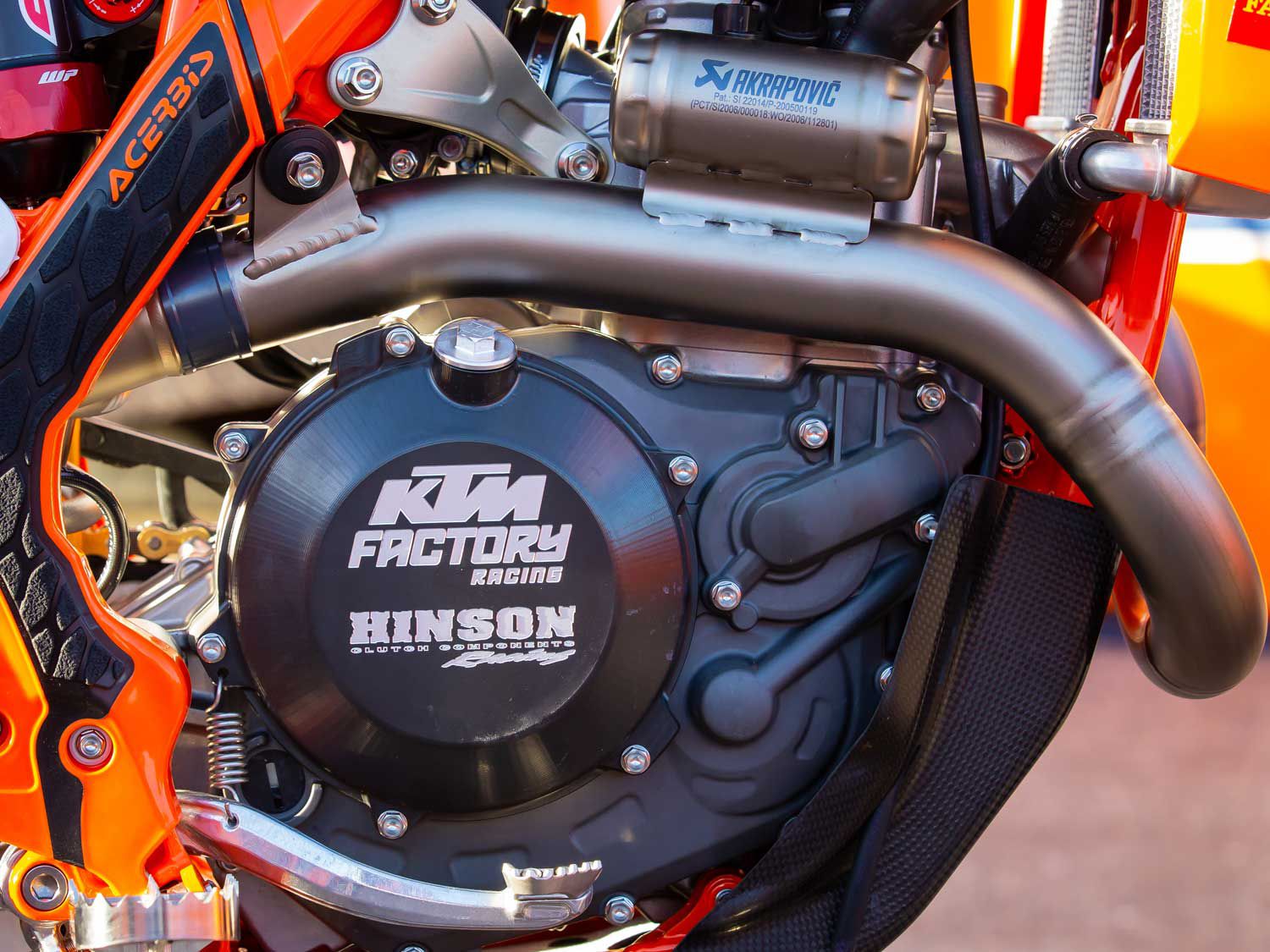 Rivera told us Webb likes his engine to be powerful but smooth, which is sometimes difficult to achieve. (Spencer Owens/)
Rivera explained that the team experiments with ECU mapping during the off-season to try and find the best setting for each rider. The final setting is the result of a collaborative effort with the team’s Austrian counterparts.

“We work [during the] off-season to try to make the best mapping between us, Austria, and all of the engineers,” Rivera said. “Ian [Harrison] helps us a lot with it too, and normally we come up with a good setting that basically we don’t touch [at] the track.” 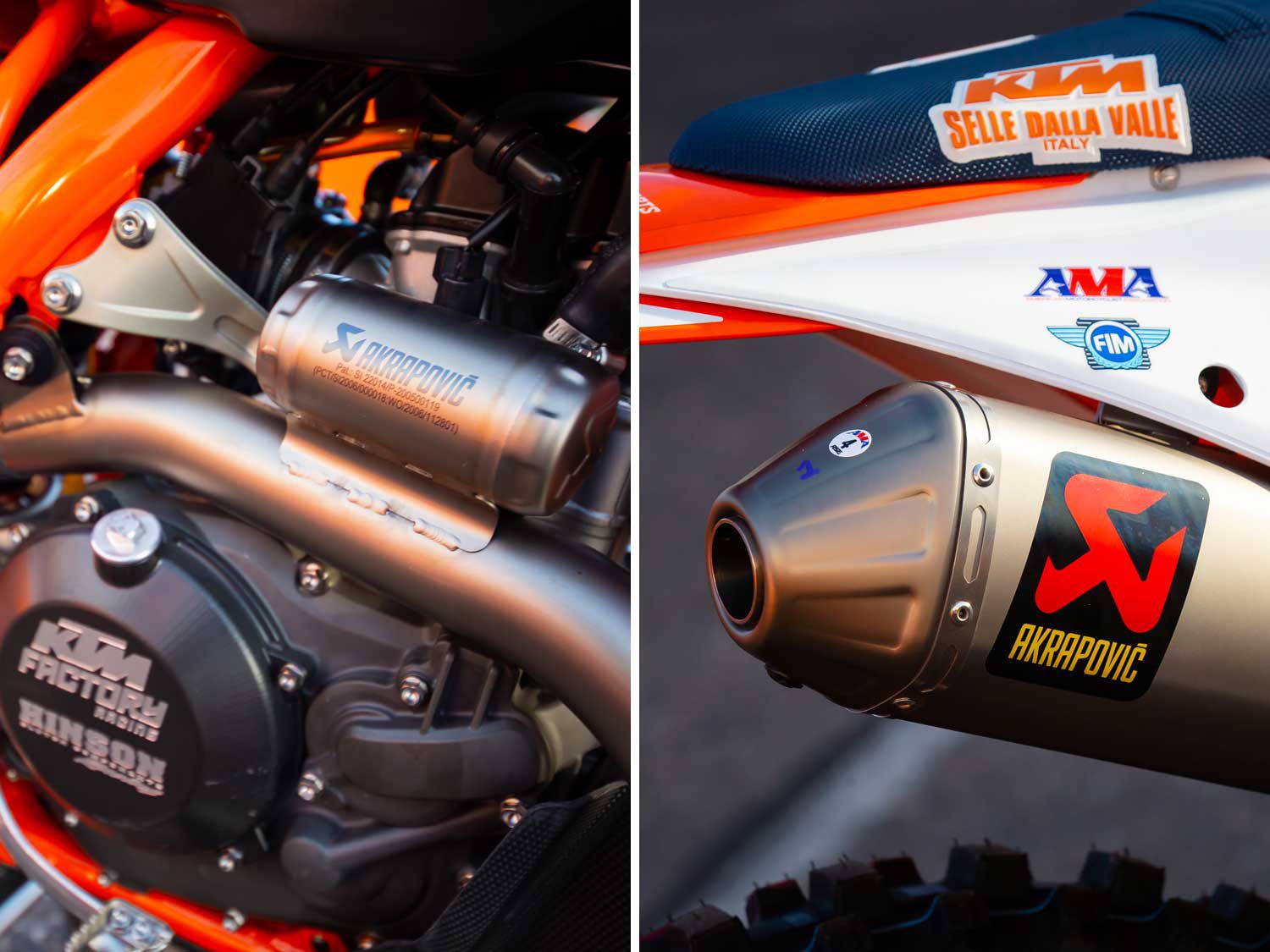 The Akrapovič titanium exhaust system is Rivera’s favorite part of the bike. He praised multiple aspects of it, especially the craftsmanship. (Spencer Owens/)
The factory powerplant and perfected ECU mapping all culminate to an engine package that provides Webb with the amount of power he needs and how he wants that power delivered, but Rivera noted that’s not always easy to achieve.

“He actually likes the engine to be very powerful but smooth, which is pretty hard to do sometimes,” Rivera explained. “But he likes it that way and he likes the bike to over-rev, so we work on the engine setting to try to make it more for his power liking.” 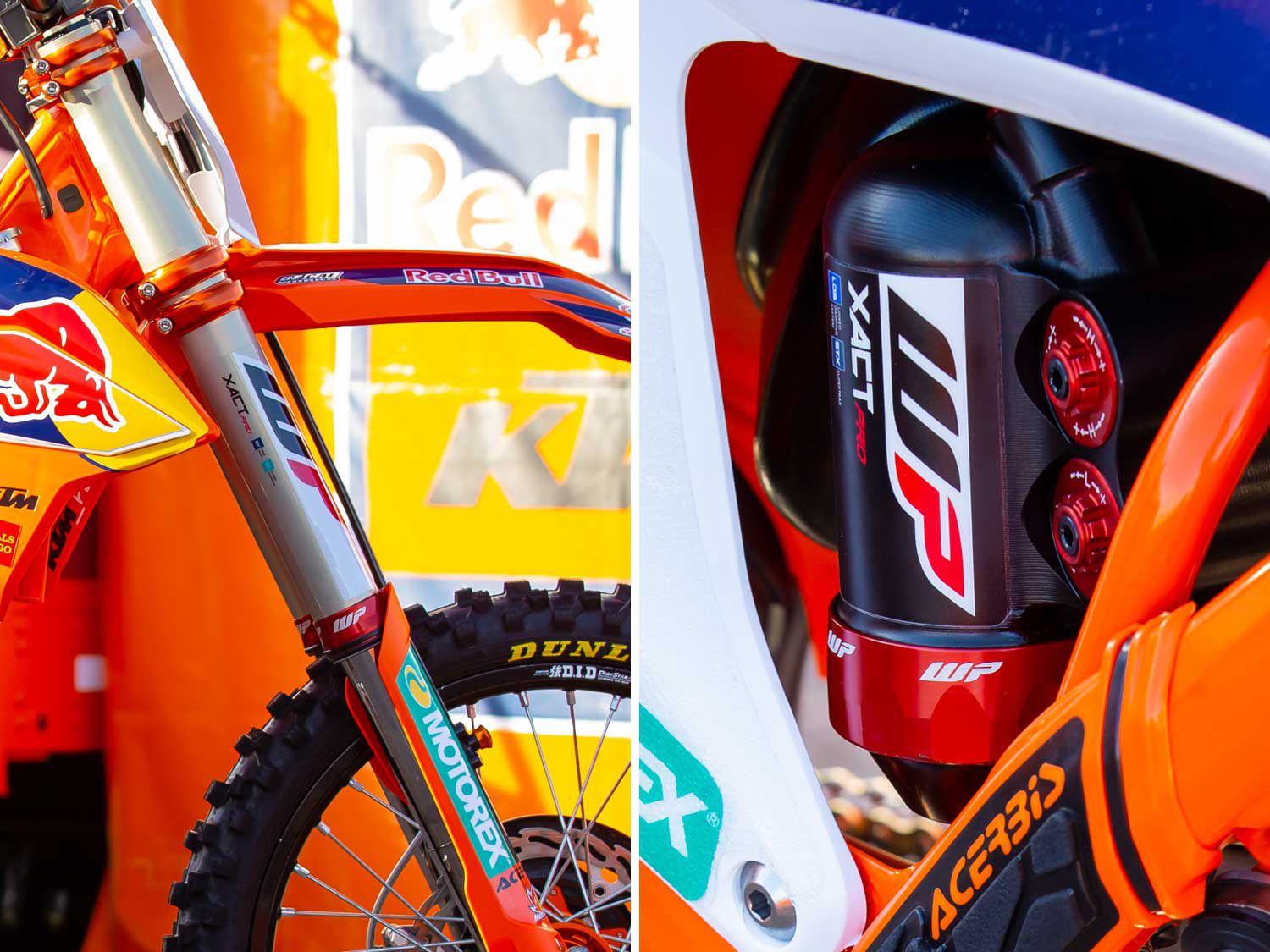 Webb focuses heavily on the balance of his WP factory suspension components. (Spencer Owens/)
Rivera also commented that Webb is very easy on the clutch and the Hinson Racing clutch components inside the engine will last a long time with him at the controls. Akrapovič has provided the Red Bull KTM Factory Racing team with titanium exhaust systems for several years, and Rivera had nothing but good things to say about the craftsmanship of the Slovenian manufacturer’s products.

“[The] exhaust is actually my favorite part of the bike,” Rivera remarked. “It’s really, really consistent [and] it fits in the bike really nice. Also, for the noise compliance, it’s really quiet. As a mechanic, you don’t have to stress the bike is not going to pass sound. It’s always on point to pass sound and it’s a really, really nice work of art.” 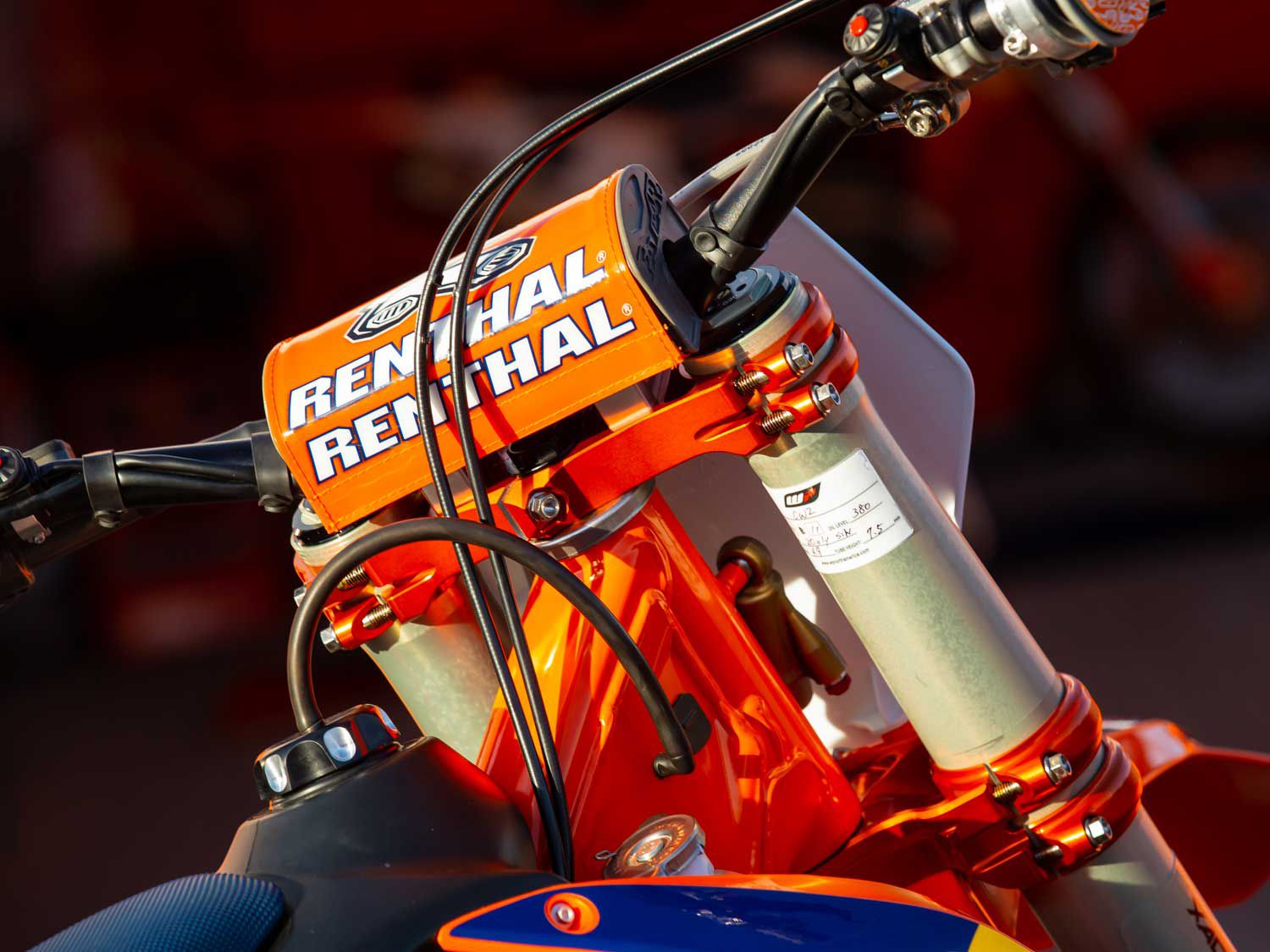 After running a Neken triple clamp last year, Webb chose to switch to the KTM PowerParts factory triple clamp for 2020. Also, behind the front number plate is a Showa steering damper, which is mounted to the frame and lower triple clamp. (Spencer Owens/)
Factory suspension components are found at the front and rear of Webb’s bike in the form of a WP Xact Pro 52mm fork and a WP Xact Pro shock. In prior years, the team ran Neken triple clamps, but Webb and Marvin Musquin have switched to the KTM PowerParts factory triple clamp for 2020. Rivera noted the riders picked it as their choice. As far as suspension setup, Webb puts a lot of emphasis on the balance of the WP units.

“He likes a lot of balance,” Rivera said. “He is very hard [on the] front brake. He likes to use the front brake a lot, so he likes the balance of the bike to be really good and that’s always the biggest challenge—to get the balance correct.” Renthal sprockets are driven by a D.I.D 520MX chain. The gearing of the reigning champ’s bike is 14/52. (Spencer Owens/)
When asked if Webb is picky about his suspension, Rivera responded, “No, not so picky. At this point in the 450 class, the bikes are so fast that you really succeed when you have good suspension—that’s going to be the key. We always try to get better and better on suspension.”

Rivera informed us Webb runs stock engine mounts on his 450 SX-F, and that as far as handling, he likes the bike to turn well, but not too quick, adding the KTM turns really well to begin with anyway. We also noticed a Showa steering damper mounted on the frame and lower triple clamp behind the front number plate of the reigning champ’s bike. 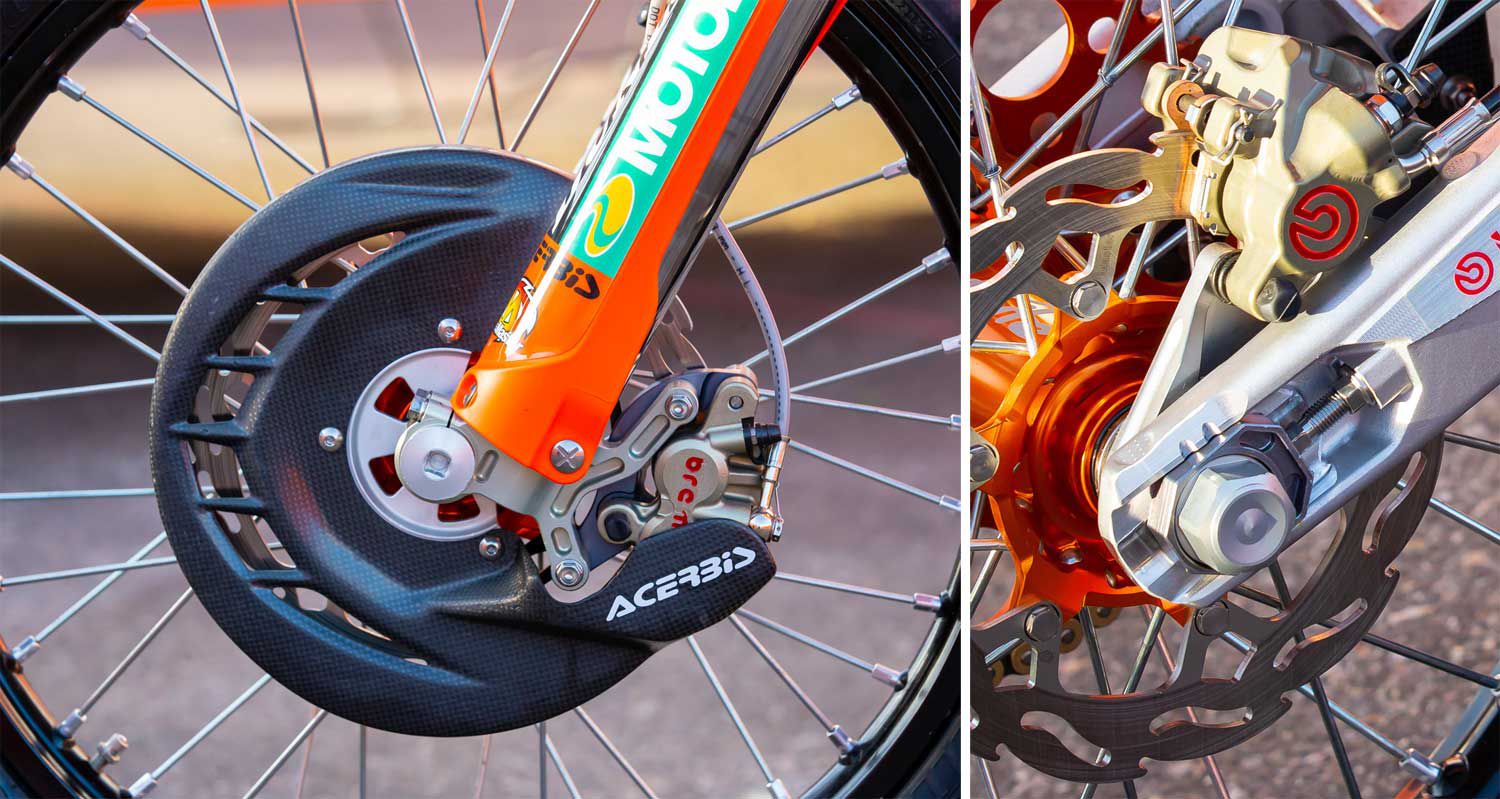 Works Brembo brake calipers are used front and rear along with Moto-Master Flame rotors. Rivera remarked that Webb uses the front brake heavily. (Spencer Owens/)
As far as the wheels, D.I.D DirtStar ST-X rims are laced to Kite hubs. In order to prevent a broken spoke from causing further damage, the spokes on the front and rear wheel are safety-wired where they cross each other. A D.I.D 520MX chain is employed along with Renthal sprockets front and rear, with Webb running 14/52 gearing. 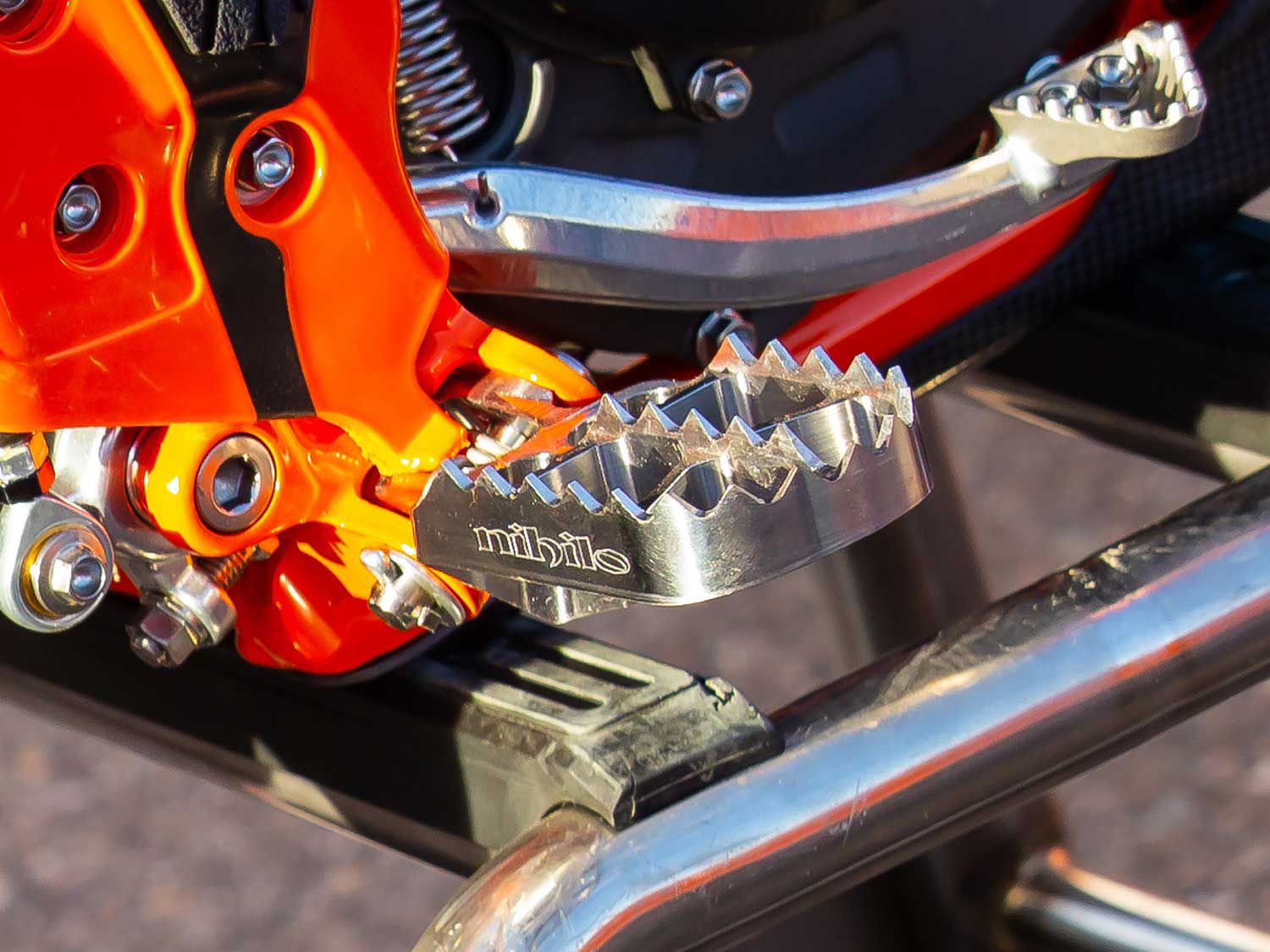 Nihilo Concepts billet titanium footpegs provide a large, grippy platform for Webb’s Alpinestars Tech 10 boots. (Spencer Owens/)
The front and rear brake calipers are works Brembo components, which Rivera told us are pretty much the same size as production. Moto-Master Flame rotors are used, with both discs retaining the stock sizes of 260mm up front and 220mm in the rear. The front is a floating rotor while the rear is a fixed unit. Also, protecting the front rotor is an Acerbis carbon fiber front disc cover. Dunlop race spec tires complete the wheel package. 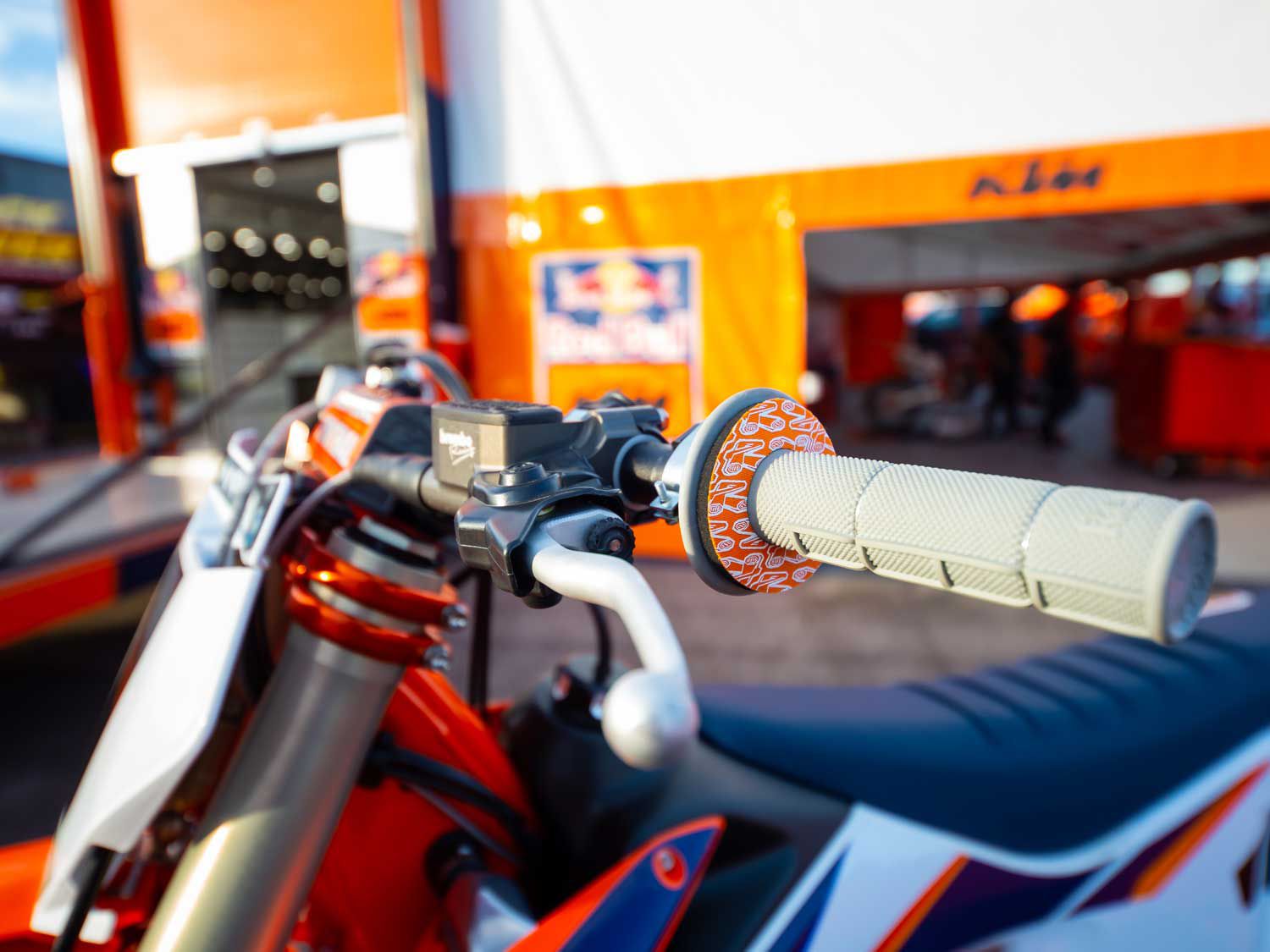 Nihilo Concepts billet titanium footpegs provide a large, grippy platform for Webb’s Alpinestars Tech 10 boots. (Spencer Owens/)
Nihilo Concepts titanium footpegs, an Akrapovič carbon fiber skid plate, and an Akrapovič carbon fiber chain guide are a few other trick items on the Red Bull KTM Factory Racing machine. For the controls, Webb runs a Fatbar, half-waffle grips, and grip donuts all from Renthal. Rivera explained that the levers are billet items for added strength over stock, but they retain the OEM ratio. He also added that the reigning champ is somewhat particular about the placement of his levers.

“He moves them up and down every week,” Rivera noted. “It changes a little bit up and down. We make a mark and then the following week we may [move them] a few millimeters back or forward, so I think it just depends on the track.” 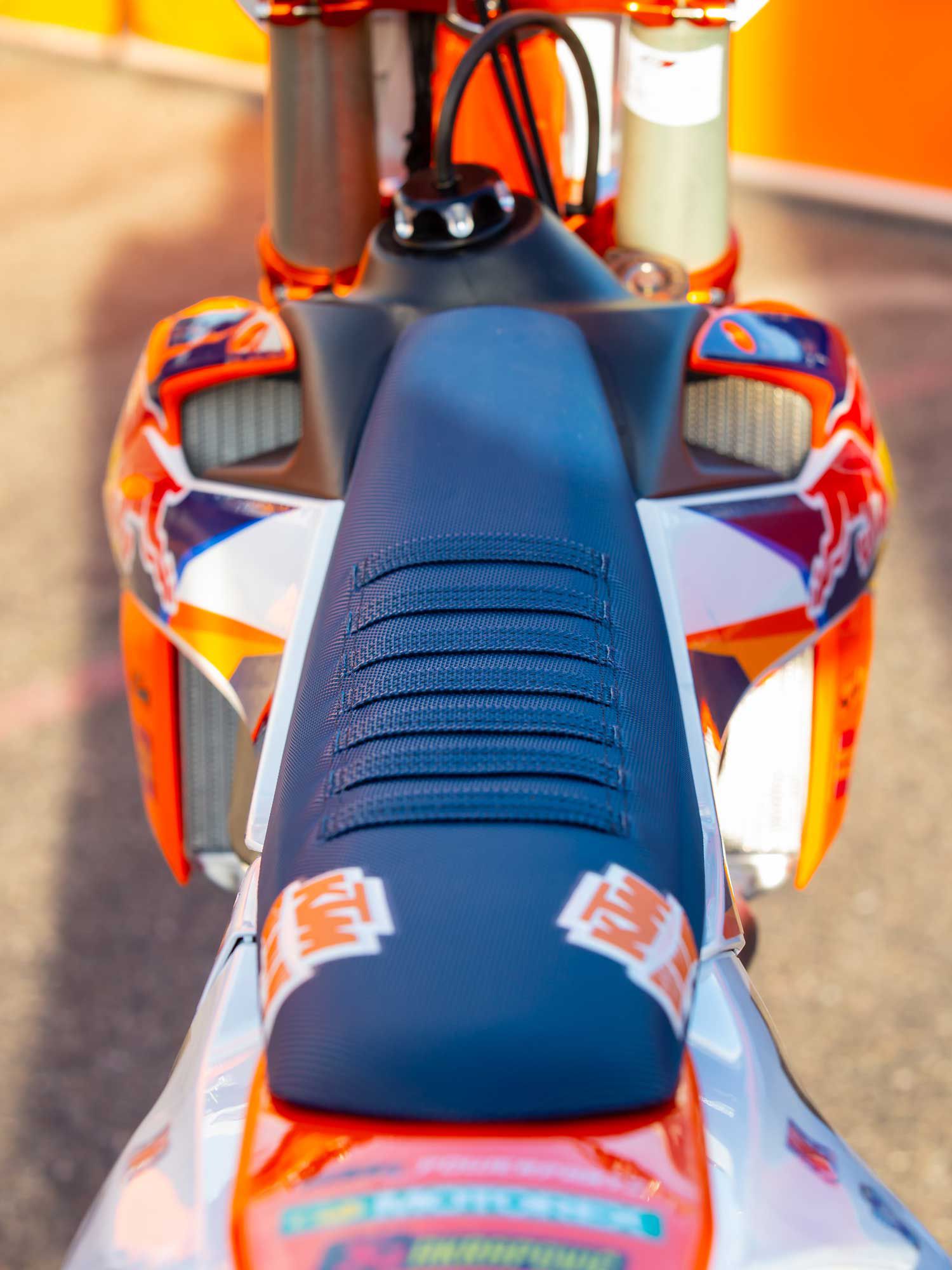 “Well, for sure the [number plate] backgrounds because one is number 1 [and the other is number 25],” the championship-winning mechanic said in jest. “Also, Cooper likes a different, more aggressive seat. Besides that, the bikes are pretty close to each other.”